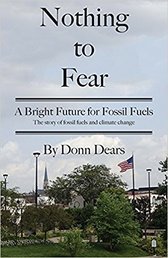 Nothing to Fear explains why mankind has the ability to withstand nearly everything mother nature may throw at it, so long as mankind doesn t institute policies that cripple its ability to respond to potential threats.
Mankind needs the availability of more energy that s both affordable and reliable, if it is to have the ability to respond to severe weather, heat or cold, rising seas, drought or any of the other conditions that could afflict people worldwide.
The terrible conditions that plagued mankind in the past, when it lacked the energy to protect itself, included famines, starvation, death from freezing cold, and death from diseases that are now largely under control.
Recently, policies have been implemented that undermine mankind's ability to withstand threats Mother Nature may thrust upon it.
These policies have been instituted as the result of an unreasonable fear of carbon dioxide, an invisible harmless gas released when fossil fuels are burned, and an unjustified terror of climate change.
Unreasonable fear and unjustified terror were phrases used by president Roosevelt in his inaugural address to highlight that fear itself is a threat.
Today, we face a threat conjured up from questionable science that uses fear to promote policies that undermine mankind s ability to react to events.
These policies are failing, and more importantly, crippling our ability to fend off any problem that might result from changes in our natural world, whether it be higher temperatures, colder temperatures, drought or sea level rise.
The fact is, fossil fuels provide the affordable and reliable energy needed to protect mankind from Mother Nature s whims.
Nothing to Fear explores the flawed science behind the social movement that blames humans for global warming and climate change. Discrepancies with the science are discussed in Chapter 4, and the status of CO2 emissions is summarized in Chapter 5. The problems and limitations of wind and solar energy are presented in Chapters 6,7 and 8.
Chapter 9 shows how increased reliance on renewable fuels between now and 2020 will undermine the grid that collects and distributes energy to our homes and businesses.
Chapters 10 and 11 address the false hope of biofuels and how taxpayer-funded subsidies grossly distort energy markets. Chapters 12, 13 and 14 explain why carbon capture and sequestration lacks credibility, how the Waxman-Markey proposed legislation foretold the implementation of extreme EPA regulations, and why efforts to substantially reduce carbon dioxide emissions are futile.
To be complete, any book on energy must also discuss possible alternatives to the hypothesis that climate change is caused by carbon dioxide emissions. While there are several such hypotheses, the sun is singled out in Chapter 15, along with the possibility that mankind may be faced with a new Little Ice Age.
Chapters 16 describes the damage that will be done to society, and the harm that will befall millions of people around the world if governments adopt policies that attempt to drastically cut carbon dioxide emissions
Chapter 17 and 18 examine why energy, primarily from fossil fuels, will allow mankind to eliminate the scourges of poverty that remain in dark corners of the globe, and why energy will allow mankind to protect itself from nearly anything mother nature may conjure up in the future.
Obviously, little can be done if an asteroid hits the Earth, or if the Yellowstone caldera erupts, but even in these dire situations energy might prove to be mankind s salvation.
My hope is that people will again start to use critical thinking.
​
Skype Interview Opportunities - Contact by Email   tvconservativemedia@gmail.com
http://ms1.bigvproductions.com:1935/studio/channel1776bonair/playlist.m3u8
TVCM/TVTP Release Form click here
Proudly powered by Weebly